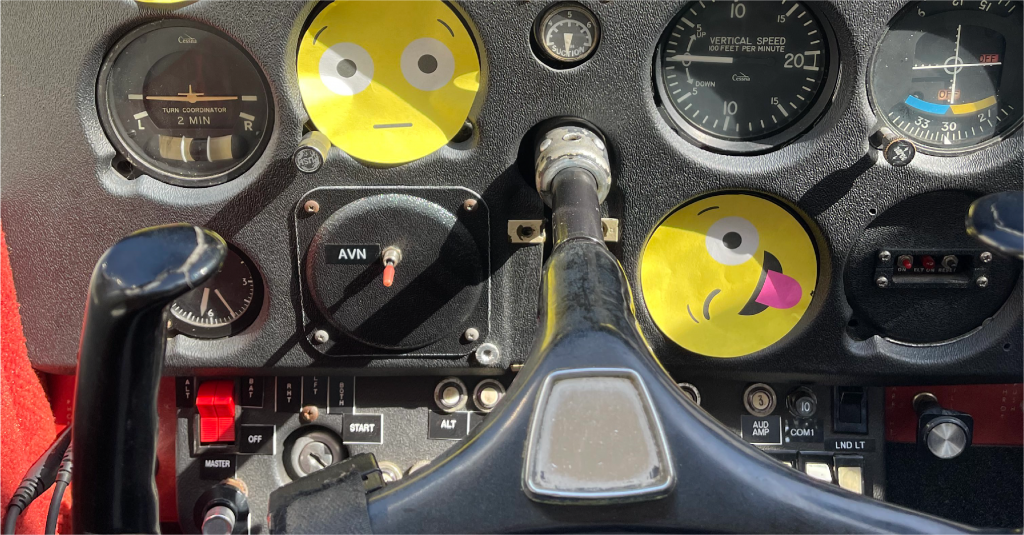 It’s a good thing not all pilots are as challenging to their Certified Flight Instructor (CFI) as I was. There would be a whole slew of bald instructors who had pulled their hair out in flight. I’m pretty sure this is why my instructor always wore a baseball cap…even on my night flights. He just turned it backwards.

Learning as a pilot starts with unlearning old things. By the time I started flight training, I bet I had logged more than half a million miles with my hands on the wheel of a car. You steer an airplane on the ground with your feet. I’m not going to tell how long it took me to taxi without my hands on the yoke. It’s embarrassing. In leadership and flight, we must recognize habits that aren’t serving us well and change them. We must unlearn some of the most basic reactions.

According to Erika Armstrong, Vice President of Business Development at Advanced Aircrew Academy, while the majority of Americans are visual learners, almost all pilots have this characteristic. She believes pilots are born not made, but that mastery comes with learning. First visually and then by mastering the art using just instruments that are able to create a visual correlation in the pilot’s brain.

Flying an airplane doesn’t just involve seeing how it’s done, the visual learning for this occupation involves quite a bit of visualization. Before I fly somewhere, I visualize where I am going and how I will get there. As a novice flyer, I picture how I will enter the traffic pattern and approach the runway. I look ahead of the plane and visualize what’s next.

While I am in the air, especially over sparse terrain, I visualize where I would land in an emergency—vacillating between what I can see out my windscreen and the charts that depict changes in elevation, airspace restrictions, obstructions and the closest runways.

The aviation industry takes this a step further by encouraging chair flying—that practice on which far too few YouTube videos have been created. I know. I searched for them when I was trying to figure out exactly how to do it. For those of you who don’t know. You sit in a chair and go through the motions of flying. It does help if you have a poster of an instrument panel in front of you. In addition to visualization, you call out the airspeeds and other measurements for various stages in the maneuver. I even make my radio calls for practice.

More sophisticated instances of visualization use simulators. These vary from desktop applications like X-Flight to sim labs, like those at FedEx’s Memphis facility, huge, accurately replicated flight decks, suspended above the floor so that pilots can feel the full impact of their inputs on the controls. Professional pilots do almost all of their emergency training in facilities like this around the world.

I’ve been on an airplane in a failed hydraulics situation, and because of the intense training and visualization of its pilots, I wouldn’t have known it was an emergency except for the fire trucks lining both sides of the runway as we landed.

But, at least in my case, unlearning and visualization were not enough.

Pilots also need tactile learning. That’s getting your hands on it and getting a feel for it. According to my primary flight instructor, visual learning skills can get in the way of learning. So he got in the way of my visual inputs. First he put his hand over my airspeed indicator in the traffic pattern to see if I could tell him how fast I was going by feel and sound. I don’t know if his arm got tired after a couple of trips around the airstrip at Lincoln, California, or if he was showing off his Post-It collection, but his trick with emojis (shown above) finally got me past my brain block for landing.

I could see outside of the airplane, but I couldn’t see the airspeed indicator, the altimeter or any of my other instruments. He made me learn to fly by feeling the airplane and by looking for outside references and also by listening to the aircraft so I would know at which power setting my plane was flying.

For true mastery, not only do you need to learn something in one of these three ways. Practicing what you’ve learned is what helps you get better and better.

Finally, and this is something that the FAA seems to have a good handle on, you learn by teaching. One of the characteristics of a good pilot is that he or she not only learned how to fly and practiced flying but has learned how to teach safe flying.

One of the reasons this is so important is because it gives you the skill of anticipating what could go wrong and learning how to master that as well. Because you’re not just figuring out what you might do wrong, you’re figuring out what someone else might do wrong and being able to anticipate and correct for that too. So true mastery of a skill or a subject comes from unlearning, visualizing, practicing, finally by teaching.

I’d love to hear how you learn!

PrevPreviousFour Benefits of Checklists
NextDo You Need a Mentor or a Coach?Next